Registration is now open for descendants, survivors and evacuees of Bombing of Darwin Day

Members of the public welcome to attend with no registration required.

On 19 February 1942 Darwin was bombed by enemy forces becoming the largest single attack ever mounted by a foreign power on Australia.

The attack left hundreds of servicemen and civilians dead, and countless others injured.

Each year we come together as a city and a nation, to pay tribute to the men and women who were there.

On the19th of February each year, we commemorate the Anniversary of the Bombing of Darwin.

In 2022, it will be 80 years ago that Australia faced an unprecedented foreign attack on home soil.

In 2011, Bombing of Darwin Day joined Anzac Day and Remembrance Day as a National Day of Observance.

The Bombing of Darwin Day is a day to reflect on our past and to pay tribute to those servicemen, servicewomen and civilians who were there - those who courageously defended our country, those who selflessly helped others, those who dealt with the aftermath, and of course, those who lost their lives.

The 19th of February 1942 marked the first of at least 64 air raids on the Top End of Australia, which continued for 18 months, until November 1943.  In commemorating this day we are also passing the story on to the next generation.

On Bombing of Darwin Day, we remember and commemorate all those who were part of the war fought over Northern Australia

Please note further events may be added closer to the date.

To be booked at time of purchase:

Transport to attractions not included.

The community is invited to take part in the Bombing of Darwin Day program of events to commemorate those who courageously defended our country, those who selflessly helped others, those who dealt with the aftermath, and those who lost their lives.

After remaining virtually untouched by foreign conflict, war had finally come to Australia's shores. The Bombing of Darwin left hundreds of servicemen and civilians dead, countless others injured and a significant toll on Darwin's infrastructure.

The attacks which began in Northern Australia on 19 February 1942 continued for 21 months.

The Bombing of Darwin was a defining moment in Australia's history and highlighted the tenacity and spirit of those who bravely fought against the attacks. The community rallied around the broken families of those impacted and worked together to rebuild after the unprecedented attacks.

On 7 December 2011, the Governor General of the Commonwealth of Australia, declared 19 February as a national day of observance to be known as Bombing of Darwin Day.

Our National Day of Observance is a time to learn about the significance of the Bombing of Darwin in Australia's military history, to understand the sacrifices of those who contributed to the defence of Australia during World War II, and to reflect on the value of peace.

A defining moment in Australia’s history

In the initial attack at 9.58am on 19 February 1942, 188 enemy aircrafts dropped more bombs over Darwin than were used in the attack on Pearl Harbour.

The attack was the first of at least 64 air raids on the Top End of Australia, which continued until 12 November 1943.

Despite its severity and impact, the Bombing of Darwin and the war fought over Northern Australia is often overshadowed by subsequent events in our nation's history.

Remnants of WWII are still visible at many locations across Darwin, Katherine and Adelaide River. These sites offer visitors a chance to pay homage to both the heroes who fought on the frontline and the Territory’s multicultural community affected by the bombing raids. Asian, European and Indigenous people worked alongside the allied servicemen as Darwin was attacked over an 18 month period.

The devastation suffered by Territorian families was profound. The evacuees who returned and the wider community came together to rebuild Darwin after the war, and many stories of tragedy and survival have been shared during these years.

No event in history has highlighted the tenacity, resilience, and spirit of those living in the Territory, quite as profoundly as the Bombing of Darwin.

One hour after the attack by the Japanese at Pearl Harbour, Prime Minister John Curtin of Australia declared that "from one hour ago, Australia has been at war with the Japanese Empire”.

British warships, Prince of Wales and Repulse, are attacked and destroyed off Malaya.

Evacuation of non-essential civilian women and children from Darwin ordered. By 18 February more than 2,000 people were evacuated. The normal civilian population during that era was around 5,000.

The British fortress of Singapore falls to Japanese forces who then prepare to invade Timor on 20 February.

Heavy air attack forces the Allied convoy to turn back and return to Darwin.

The Allied convoy arrives back in Darwin.

9.58am Japanese aircraft drop the first bombs and commence their attack on Darwin Harbour and the city surrounds. 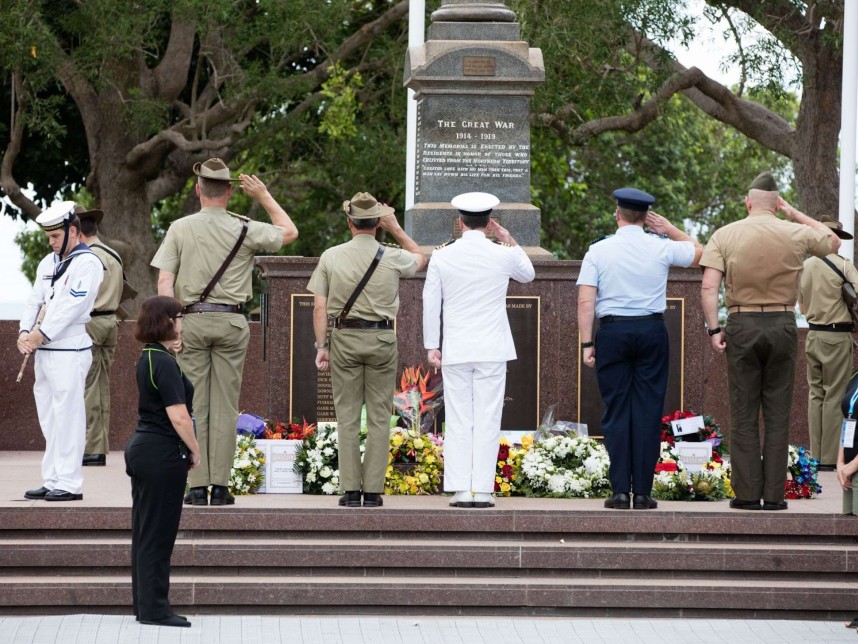